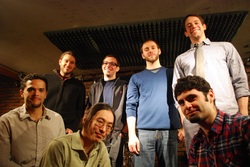 The Way Out is an eight-headed funk monster from Boston, MA.  We play a unique blend of funk, hip hop and jazz.

Our debut album is on its way and we are all really excited to share it with you!  We've been in the studio tracking day and night and things are sounding great!  Look for it on iTunes in Spring/Summer 2013.

The Way Out is:

About the Album: A Retrospective Timeline

Recording this album was an exciting, daunting, challenging, and rewarding process.
Powered by